Review of the CleanBox 1

Philip Peters is the recent agent for UCE Machines covering the UK and India. This is his initial review, explaining why he was motivated to join the company and take the agency.

My first impression of the CleanBox airport security tray machine was its overall appearance, which resembled a heavy-duty and well-designed piece of equipment. It had obviously been developed to a very high level of engineering, a robust machine which could withstand the rigours of airport operations, which as we know are 24 hours, 365 days of the year!

But of course, looks and engineering alone does not mean that it will deliver the needs of a busy airport, especially with the challenges that airport operators are now facing with COVID-19! So, my next stage in deciding whether to become involved with UCE Machines and the Cleanbox, was to gain an understanding of its background and deliverables.

Firstly, it was very reassuring to discover that UCE Machines had been working on this solution for the past 4 years, which started after a three week study at Helsinki-Vantaa airport in 2016 by BioMed Central Infectious Diseases and the University of Nottingham, where it was found that airport security trays where the greatest carriers of pathogens and other viruses, for example; Coronavirus, Adenovirus and Influenza A. More viral samples were found on these security trays than in the terminal toilets!

It is worth pointing out at this point, that most other offerings for this current challenge are being developed reactively by manufacturers, from building in anti-virus protection when making the trays, to Ultraviolet light systems that sit under each conveyor belt, the issues with these new initiatives are that the trays still need to be washed (in both cases) so double doing. Plus, in terms of the UV conveyor belt option, the ability to cover 100% of the trays is debatable, and you have to install one system under every conveyor belt. If you take Barcelona airport for example (T1 & T2) they have around 60 lines = so 60 x UV systems required, this leads to a very expensive option, and doesn’t take into consideration the labour still required to frequently wash the 23,000 trays that Barcelona airport has by hand (see stats below).

UCE have recently fitted one CleanBox at Barcelona airport and was given the first stage task of cleaning the 23,000 trays they have. The machine ran constantly for 3 days and completed the task easily (so its robustness has been proven, as well as its cost effectiveness). To hand clean each of these at roughly 10 trays an hour currently takes them 96 full days to complete!

Coming back to UCE’s development of the CleanBox, after many attempts and a lot of financial investment and time, a design was finally decided upon which would deliver four key objectives; cleaning, disinfecting, adding a protective coating and spin drying, but within as short a period of time as possible, so as to handle multiple trays.

The main challenge was how to ensure that during the first three stages (wash, disinfect and coat) that 100% of the trays would be covered, inside, outside, under the lips and handles. This part of the design took almost two years to develop, and because the end result was so unique, it now holds global patents for its delivery system.

A second critical factor was in developing a coating/film that would give three days of ongoing protection for each tray. For this part of the puzzle UCE partnered up with BENTEGLUX one of the global leaders in decontamination fluids, to develop a specific solution to achieve this.

It is also worth pointing out that UCE Machines have previously had 15 years’ experience in cleaning machine technology, so the fact that it took nearly 4 years to come up with a solution demonstrates the challenges involved.

So, what has been the overall outcome? And why did I make the decision to join UCE?

After the initial 7 months of testing at Valencia airport all the objectives where achieved in terms of the machine’s capability, its ability to work continuously in a fast-paced environment, its cleaning and protection outcomes, environmental considerations and finally its flexibility.

As I mentioned earlier (Barcelona Airport) demonstrates that its commercial use and robustness has been recently proven, the three-stage cleaning, disinfecting and coating has met all the demands of the airport authorities and has achieved certification for its 72 hours of protection. It uses just 0.25 litres of water for each cycle, and each cycle is just 45 seconds long, so this ticks the environmental KPIs! This fast cycle enables up to 220 trays an hour to be washed, making it a simple one-person operation and handling the demands of the world’s largest airports.

Finally its flexibility, the system can be easily adapted to take other trays and shopping baskets, this ensures that airport authorities can fully utilises the CleanBox by sub-letting to duty free for their shopping baskets, staff canteens for their trays, airside cafes that use trays, and any other relevant airport concession.

UCE are currently working on CleanBox 2 which will take the luggage trollies that passengers use, so watch this space…

Its use can be extended outside of airports, for hospitals, care homes, supermarkets and fast food outlets.

So why did I join the team? Well I think that is now self-explanatory! 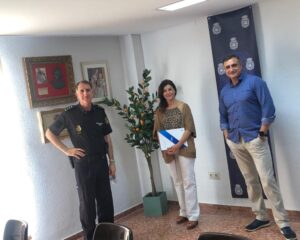 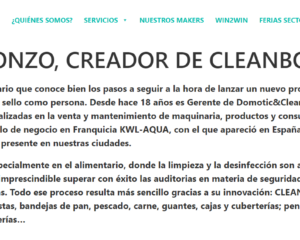